As already mentioned, Chinese Chess is a game that I really enjoy and yet it has gone mostly unnoticed in the western world. Ever since I learnt the game around 15 years ago I have read that there are more Chinese Chess players than Western Chess in the world. I’m not sure this is still true (China is pushing Western Chess very hard now) and obviously Chinese Chess is largely restricted to China plus its neighbours. However I feel it deserves to be better recognised and hope that this introduction can go a small way towards this. 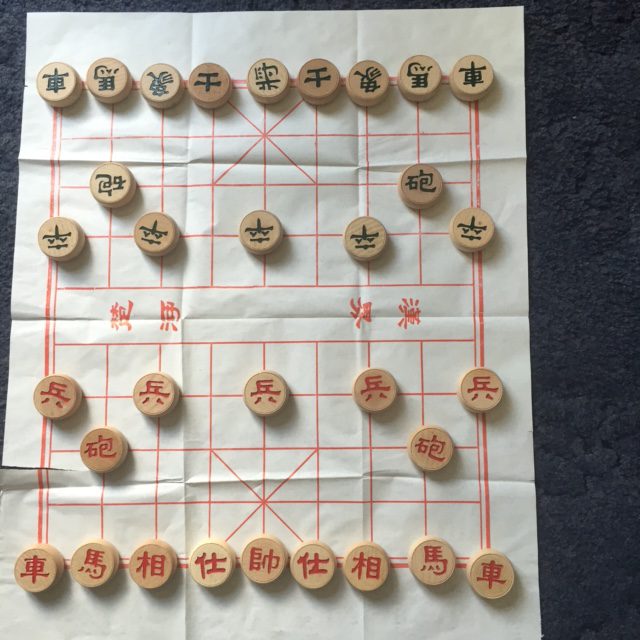 This is what the board looks like, a few observations before we get onto the rules.

Now we come to the pieces. From left to right on the bottom / top rows these are as follows.

The Chariot. This moves in exactly the same way as the Rook in Chess. It can move forwards, sideways and backwards in a straight line but cannot jump over other pieces. It captures by replacement by moving onto the same square as an enemy piece, as do all of the other pieces (except the Cannon, we’ll come to that soon). The symbol actually looks a bit like a chariot, at least to me.

The Horse. This is very similar to the Knight in Chess, but with the exception that it cannot jump. It moves in an “L” shape, 2 squares in one direction and 1 square at 90 degrees. However it cannot move if the square orthogonally next to it is occupied (either a friendly or enemy piece). For example the horse on b1 in the initial position can move to a3 or c3, as the b2 square is unoccupied. However it cannot move to d2 due to the piece on c1. The way I remember the symbol is to think of the 3 marks at the bottom as hoofprints.

The Elephant. This is the equivalent of the Bishop and is how the piece used to move hundreds of years ago. It moves 2 squares diagonally but cannot jump over the intervening square. It also cannot jump over the river, meaning that there are just 7 squares that each elephant can ever occupy. Due to this, it is primarily a defensive piece. I can’t really help with the symbol this time, it’s different for both sides for some reason.

The Advisor / Guard. This can only move 1 square diagonally (how the Queen used to be able to move) and cannot leave the palace, the 3×3 area marked out by the diagonal lines on the board. Again, it is a defensive piece, I can’t really help with the symbols but as they’re restricted to the palace they’re pretty easy to recognise.

The King. As with Western Chess, the aim of the game is to deliver checkmate to the King, although Stalemate also counts as a win in Chinese Chess. The King can move 1 square orthogonally (not diagonally) and can never leave the palace. There is no castling and it is also illegal for the 2 Kings to be facing each other with no pieces in the way. As with the Advisor I can’t really help with the symbol but as it’s always in the palace it’s fairly easy to recognise.

The rest of the row is symmetrical, in order they are another Advisor, Elephant, Horse and Chariot.

Next we come to a couple of new pieces that start on the 3rd row, the Cannons. These move exactly the same way as the Chariots but capture in a different way. In order to capture they must jump over one piece (friendly or enemy) and then capture the next piece along that line (an enemy piece obviously). For example it is possible to take a Horse on the first turn by jumping over an enemy cannon, although this is thought to be bad as Cannons are generally stronger than Horses in the early stages of the game. I recognise the symbols by thinking of the line at the bottom right as a fuse.

Finally we come to the pawns, each player starts with 5 of these on the 5th row. Initially they can only move forwards one square (the double move doesn’t apply here), however once they cross the river they are able to move either one square forward or one square to the side. Unlike Western Chess they capture in exactly the same way that they move (not diagonally, there’s no en passant rule either) and are actually a fairly powerful piece once they cross the river. However they don’t promote once they reach the end, they remain as pawns and can still move sideways. The symbol is a fairly simple one, and as you start with 5 pawns you can usually recognise them.

In Chess there is a points system to rank the pieces (9 for the Queen, 5 for the Rook etc.), however I’ve never come across one for Chinese Chess. Maybe there is one in a Chinese book somewhere but I think this is because the piece values change during the game. The most powerful piece is the Chariot, with Cannons and Horses being of roughly equal value. Cannons start off more powerful as they need other pieces to jump over in order to capture, however Horses are more valuable later in the game as the board starts to clear. 2 Cannons / Horses are generally more valuable than 1 Rook and a rule of thumb is that a Horse / Cannon combination is better than having 2 Cannons or 2 Horses.

Advisors and Elephants don’t really fit into any points system as they only have a defensive purpose. They can never be exchanged for other Advisors / Elephants, and even an advanced pawn is generally more useful. You’d only ever exchange an attacking piece for any if you were getting through to the King. Pawn values fluctuate wildly as well, they’re pretty expendable in the early stages but can be strong attacking pieces later in the game.

That covers almost all of the rules, the only other one I can think of is that perpetual check / attack is not allowed. This cuts down significantly on the draws (would Western Chess benefit from this?), although the number of defensive pieces (Elephants & Advisors) does mean that a material advantage won’t always be enough to win. However if you can remove these defensive pieces then a lone Horse or even a pawn can win. Even a cannon can win providing there is a friendly Advisor for it to use. Regarding repetitions, it’s not always 100% obvious but the rule is that the attacking side has to vary at some point.