An introduction to Hearthstone

Home  >>  Uncategorized  >>  An introduction to Hearthstone

An introduction to Hearthstone

Most of the games I play are fairly classical games, so it’s time for something a bit different. Hearthstone is a collectable card game that is only played online (to my knowledge), I’ve been playing on and off for a few years now. It’s an interesting time to be playing at the moment as a new expansion has just come out and there are some new cards out that people are experimenting with. 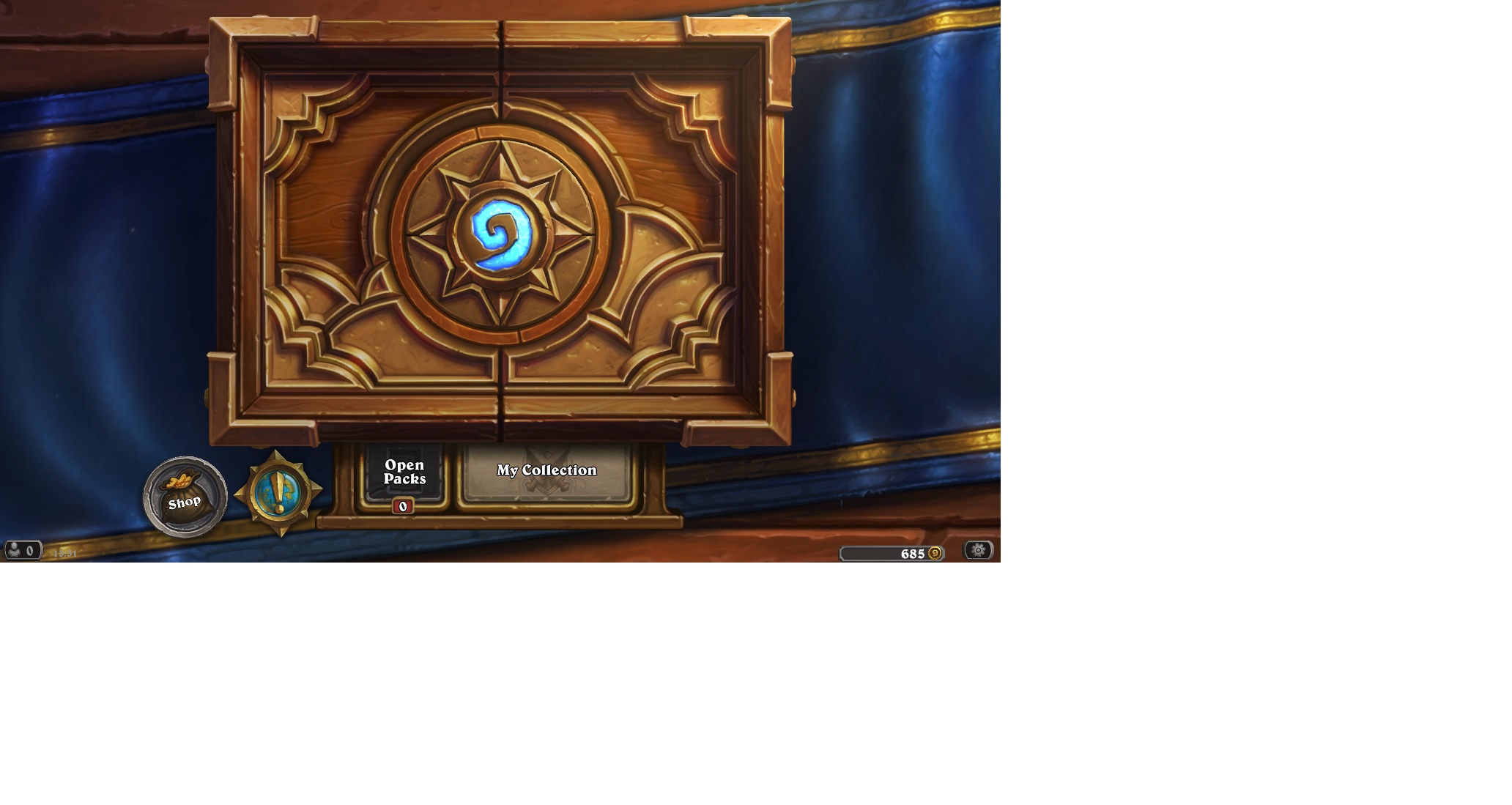 Hearthstone is based on World of Warcraft, which is a so called MMORPG (massively multiplayer online role playing game) where you control a character, level it up and interact with other player across the world. It’s a game I played many years ago and really enjoyed, however I gave it up as it was incredibly time consuming. I’d heard some good things about Hearthstone some time after though and decided to give it a go.

If you’re an existing Hearthstone player you can probably skip a lot of this, although I will leave some tips at the end which will hopefully prove helpful. Otherwise, feel free to keep reading!

Hearthstone is a one on one game where the object of the game is to reduce your opponent’s hero to zero health. This is done by playing cards which can have various different effects. Many cards are minions, which you place on the board and can then use to attack the enemy hero or their minions. Most other cards are spells, there are a wide variety of them but most of them either deal damage to the enemy or have a beneficial effect to your minions. There are also weapons that some heroes can use and there are also some rare Quest cards that have just been released with the new expansion. 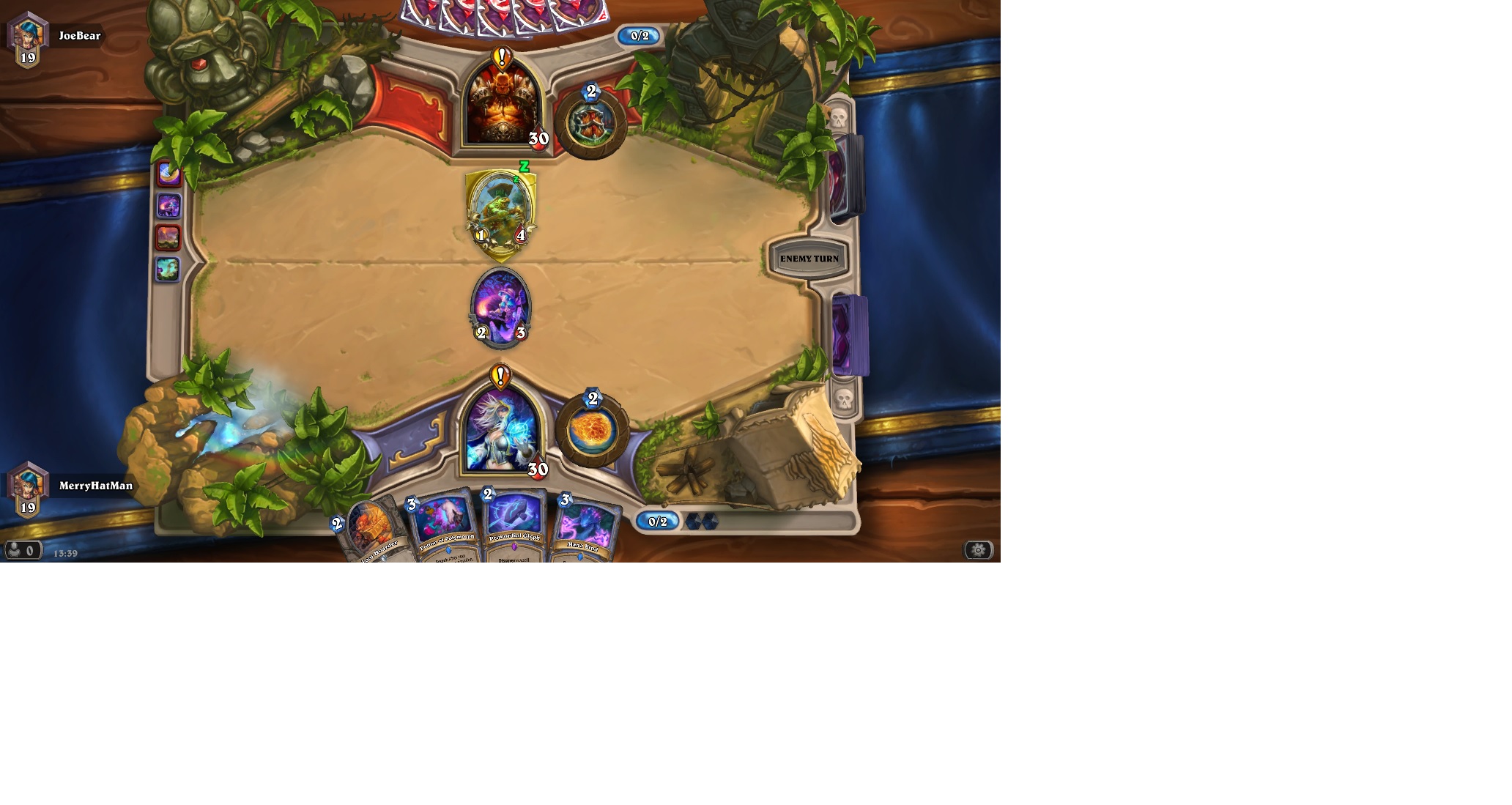 The screenshot above shows the early stages of a game, my hero is at the bottom along with the cards I currently have. The 30 is the amount of health I have, which is the amount you start with. I’ve also played a minion which is the small purple thing above, it has 2 attack and 3 health. This means that whenever it attacks, it will reduce its target’s health by 2, however if its health drops to 0 it will die. My opponent is at the top of the screen and also has 30 health. I can’t see his cards but can see that he has 5 of them. He also has a minion with 1 attack and 4 health.

The mechanics of the game are as follows. Before the game you select your hero (there are 9 different ones) and a deck of 30 cards from which you will draw from. It is then decided at random who will go first, whoever is selected draws 3 cards from their deck at random. The second player draws 4 cards and is also given a fifth card known as a coin.

At the start of each turn the player draws a card from their deck at random and is then allowed to play some cards. Each card costs a certain amount of mana, the amount of mana you can spend on the first turn is 1 and increases by 1 each turn (but is capped at 10). Therefore during the early stages of the game the players will only be able to play fairly weak cards (if any), however the cards played will get more powerful over time. The coin gives you an extra mana for one turn only, this along with the extra card is compensation for going second which otherwise would be a significant disadvantage.

Also during your turn you are allowed to attack with any minions that you’ve placed. Most minions can’t attack on the same turn that they’ve been played and must wait until the next turn, although there are some minions with a Charge ability who can attack right away. You may either attack the enemy hero or an enemy minion, dealing damage equal to your attack. If you attack a minion though, they will attack you at the same time. This is known as trading as it’s not uncommon for both minions to die during an attack.

Once you’ve played your cards and attacked, you end your turn and your opponent starts theirs. From move 2 it is possible to use your hero power, this is a special ability that can be used multiple times throughout the game, but usually only once a turn. It costs 2 mana and is generally quite a weak ability, however it is useful if you are short of cards or don’t have anything useful to play that turn. The actual ability depends on which of the 9 heroes you are playing, they include dealing damage, healing damage, summoning minions, drawing a card and equipping a basic weapon.

That’s about it really, although there are a huge range of cards available and I won’t go into all the details here. Although there is quite a bit of skill during the game (although a healthy dose of luck too), the real skill is to choose an initial 30 cards that work well together. Although the latest expansion has only been released a few days ago there are already certain decks that are looking very popular.

One problem I have is that I’m not an especially active player and I’m certainly not prepared to spend any money on the game. Therefore there are a number of very powerful cards that I don’t own and can’t add to my decks. It is possible to earn cards for free, mainly using gold from daily quests, however it’s quite a slow process. However there is another form of playing called the Arena which evens things out, as it doesn’t depend on what cards you own and you probably won’t run into other players with 30 beautifully coordinated cards. It costs gold (or money if you prefer?!) but you are guaranteed some sort of reward, including a deck of 5 cards for your collection.

Here’s how it works. First of all, you are presented with 3 different heroes and must select one. You are then presented with a choice of 3 cards and must pick one for your deck. You are then shown 3 more and must pick another. This carries on until you have 30 cards, you are then matched up against another player who has selected their deck in the same manner. You play a series of games against different players until you lose 3 games. I believe you can only win up to 12 games, although my best ever run is 8 wins so I’ve yet to see this. Once you’ve finished you receive a reward which rises in value with each win.

Okay, as promised some time ago here are some tips.

That’s enough for now, if you play the game already or are tempted to give it a go then please feel free to add me as a friend in the game (I’m MerryHatMan). And good luck!